The recent passing of Madeleine Lebeau marked the last of the surviving credited cast members from Casablanca. In her small role as Yvonne, she delivered one of the most emotional and lasting lines in the ‘battle of the anthems’ scene, with her tearful “Vive la France!”

LOYALTY
The theme of loyalty is ever present throughout Casablanca, which has been called “World War Two in a bar.” Some are steadfast, like Sam is to Rick, while others shift with the wind, treading the line between loyalty and betrayal. Rick Blaine, who is symbolically the personification of America and her position during the early stages of WWII, tries to remain neutral.

We first meet Yvonne in the bar where she confronts Rick:

Yvonne: Where were you last night?
Rick: That’s so long ago, I don’t remember.
Yvonne: Will I see you tonight?
Rick: I never make plans that far ahead.

In this brief exchange, we learn that Rick is living moment-to-moment, and relatively cold, at least on the outside, which is part of his defense mechanism (note the body language). She is trying to be loyal to him; he is loyal to no one.

The next night, Yvonne shows up at Rick’s with a German soldier, ostensibly to make Rick jealous by pretending to betray him. Sasha, the bartender, only has eyes for Yvonne.

Later, the Germans gather around Sam’s piano to sing “Watch on the Rhine” which infuriates Rick and causes Victor Laszlo, the leader of the Free French movement, to take action.

Renault, who admits to placing his loyalty with the prevailing wind, keeps an eye on both sides:

Laszlo commands the band to play the French national anthem, “La Marseillaise”: His loyalty is with his country.

The band leader is loyal only to Rick, and looks for his signal.

Rick nods in approval and the bands starts to play the counterpoint. He is loyal to the underdog, which in this case is the Resistance.

Major Strasser and the other Germans double their efforts to sing louder.

Laszlo rallies back and gains the upper hand. He loyalty is with freedom over tyranny.

Ilsa remains glued to Laszlo. There is no questioning her loyalty at this moment.

Finally, it becomes clear the Yvonne is loyal to neither Rick nor the German as she exclaims, “Vive la France!” at the end of the song.

Thank you, Madeleine Lebeau, for playing such a wonderful Yvonne in this memorable scene. 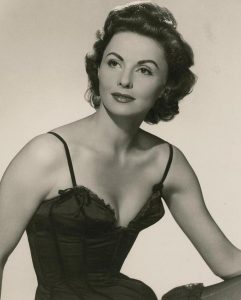